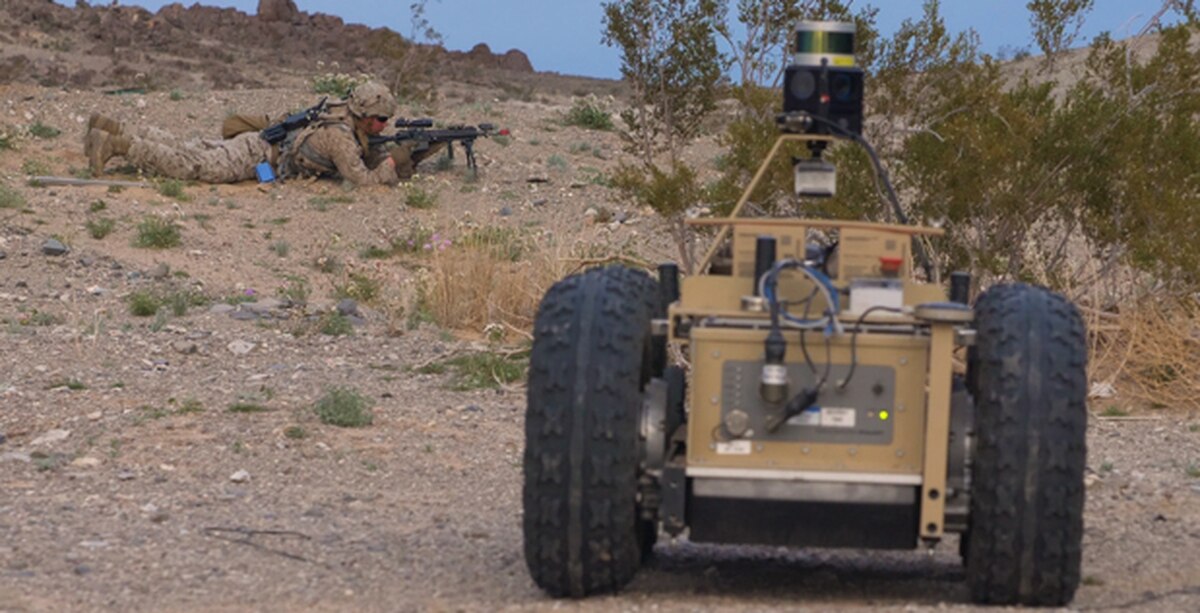 Marines recently practiced battling alongside robots, with humans and machines each performing sensing and processing duties as apart of a Defense Advanced Research Projects Agency program.

During the exercise, humans wore special communications devices and coordinated with robots, a foray into the future of war. But it’s a kind of fighting where machines assume specialized roles and humans are left in charge of pulling any triggers.

The systems used in the exercise allow dismounted squads to “collaborate with AI and autonomous to make better decisions in complex time-critical combat situations,” according to DARPA. This is the agency’s syntax for what capabilities were demonstrated but it’s also an awkward euphemism for battle. Clumsy as the phrasing is, it reflects the reality that modern battles erupt suddenly, turning routine, non-combat moments into the opposite.

The exercise is also presented as a fusion of hardware and tactics. It’s a way for Marines to learn how to fight with the new tools in hand and a way to develop new ways of fighting that are enabled by those same tools.

The systems were testes in the desert and mock-urban facilities in Twentynine Palms, California. Among the alphabet soup of systems in the exercise were CACI’s BITS Electronic Attack Module (BEAM) Squad System (BSS) and Lockheed Martin’s Augmented Spectral Situational Awareness and Unaided Localization for Transformative Squads (ASSAULT). These tools could share information with Android Tactical Assault Kits (ATAKs). (Besides autonomy, the system names demonstrate the lengths to which the defense community will go for a useful backronym). The BEAM Squad System looks for threats in radio frequencies and other cyber means, rendering useful information on an otherwise invisible spectrum of combat. Lockheed Martin’s ASSAULT coordinates sensors on robots, letting them act as spotters while their fleshy companions take on the role of shooters.

Notably, making these tools work meant that humans wore vests to provide tracking information to the robots they were fighting alongside. The information provided is undoubtedly useful for the robots and humans to collaborate, but it’s worth stopping for a moment and wondering what would happen if an adversary could listen in. As the human becomes a sensor-bearing node in a network of combat, a battle advantage will be gained by harnessing that network. It’s also an advantage that can be lost, potentially catastrophically, if the network itself becomes compromised.

For now, we can enjoy the simple wonders of robots and humans moving together in an mock battlefield facing a phantom threat.