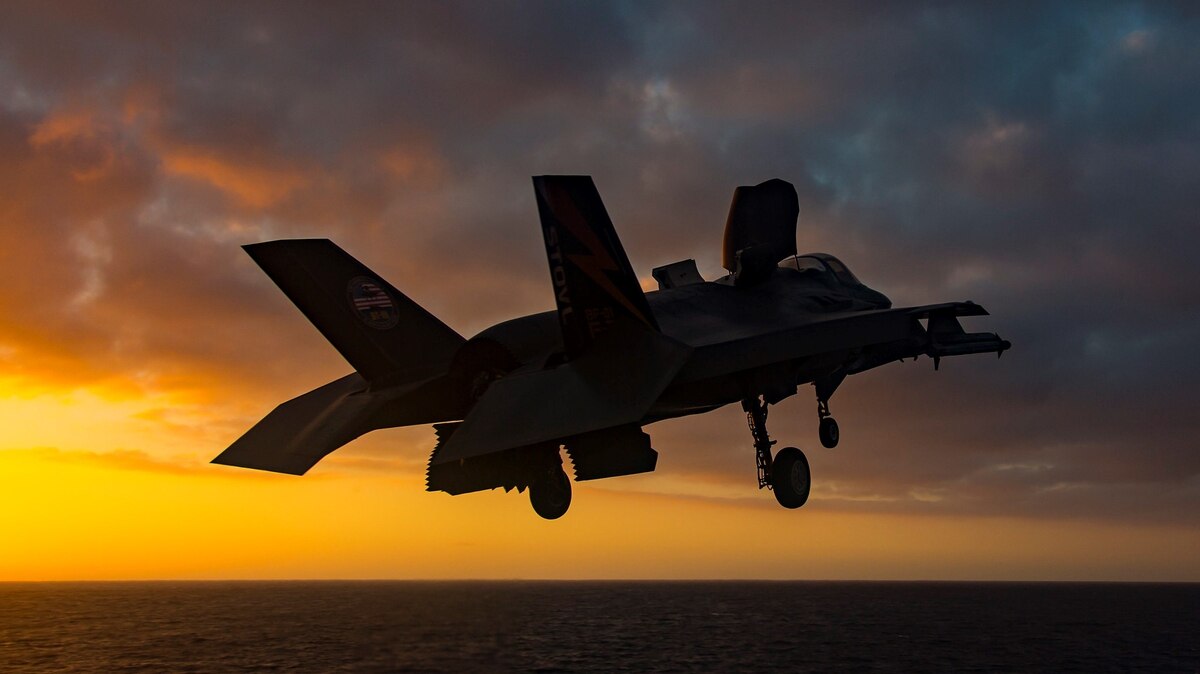 WASHINGTON and MELBOURNE, Australia — Japan has formally expressed interest in joining the F-35 program as a full partner, but the Pentagon plans to shoot down that request, Defense News has learned.

Sources say Japan’s request to join the partnership creates major political headaches for the Pentagon, with fears it would cause new tensions among the international production base for the joint strike fighter and open the door for other customer nations to demand a greater role in future capability development.

In a June 18 letter from Japan’s Ministry of Defense to Pentagon acquisition head Ellen Lord, obtained by Defense News, Atsuo Suzuki, director general for the Bureau of Defense Buildup Planning, formally requests information on how Japan could move from being a customer of the F-35 to a full-fledged member of the industrial base consortium.

“I believe becoming a partner country in F-35 program is an option,” the letter reads. “I would like to have your thoughts on whether or not Japan has a possibility to be a partner country in the first place. Also, I would like you to provide the Ministry of Defense with detailed information about the responsibilities and rights of a partner country, as well as cost sharing and conditions such as the approval process and the required period.”

“We would like to make a final decision whether we could proceed to become a partner country by thoroughly examining the rights and obligations associated with becoming a partner country based on the terms and conditions you would provide,” the letter concludes.

Lord, the Pentagon acquisition head, is scheduled to meet with Japanese officials this week, and the question of membership is expected to come up. But Tokyo won’t like the answer.

Although Lord’s office will be responsible for carrying the final message to Japan, the F-35 Joint Program Office told Defense News that the partnership remains limited to the initial wave of F-35 investors.

The decision was documented in an April 2002 memo by the Pentagon’s acquisition executive stating that, “except for those countries with which we are already engaged in Level III System Development and Demonstration partnership negotiation by 15 July 2002, we will not be able to accommodate any additional Level III partners due to our inability to offer equitable government-to-government benefits and U.S. industry’s inability to offer equitable ‘best value’ workshare arrangements,” according to Schiff.

The F-35 partners in 2007 reiterated in a separate memo that only the partners who participated in the development phase of the F-35 program would be eligible to remain partners during the production, sustainment and modernization stages.

A source familiar with internal discussions says the Pentagon is concerned that letting Japan become a program partner would lead to other nations demanding similar access.

Japan’s query is hitting the F-35 program at a time of change. Vice Adm. Mat Winter, the head of the JPO, retired this month after only two years on the job, and Turkey’s pursuit of a Russian air defense system has resulted in them being booted from the F-35 consortium, with all work being done by its companies to end early next year.

So in many ways, Japan asking to be made a full partner now makes sense, said a former senior official in the F-35 program, who agreed to speak on background out of respect for current decision makers.

“You now lost a partner in Turkey, so there is a vacant parking space, so to speak. And other than the U.S. services, [Japan] will be the one nation with the most F-35s,” the former official said, noting two changes that have happened in just the last year.

There are two tiers of participation in the F-35 program. The first-tier members are considered “partners” in the program, which comes with direct involvement in the joint program office. That includes having national representatives stationed in the JPO, weighing in on decisions about future capabilities, and deciding what future industrial participation looks like.

And that industrial participation is important — building parts of the jet that go into the global supply chain is expected to net the partner nations billions in revenue over the lifetime of the program. The partners are made up of the first nine nations to sign onto the program: Australia, Canada, Denmark, Italy, the Netherlands, Norway, Turkey, the United Kingdom and the United States.

The second tier consists of “customers” for the jet, comprising nations that came later to the program. Those nations command less industrial participation, lack voting power on what future development of the jet looks like, and do not have officials assigned to the JPO. That tier is made up of Israel, South Korea, Belgium and Japan, but could expand in the future with Finland, Singapore and other nations.

In December 2018, Japan announced a plan to expand procurement of F-35s from 42 to 147 jets, making it the single largest F-35 operator outside of the United States, as well as one of only three foreign nations to operate the F-35B jump-jet model. But Tokyo appears interested in increasing its teaming with the program, in large part because it wishes to take part in guiding new capabilities development as the plane gets ready for its Block 4 upgrade.

“There are various merits in participating in continuous capability development and delivery deliberation process by partner countries. In addition, there is a further need to obtain flight safety information for accountability to the public,” the letter from the Japanese defense ministry reads. “I understand that partner countries are allowed to join [JSF Executive Steering Board], to be involved in capability improvement, to dispatch their personnel to JPO, to participate in parts production and to access further information.”

The emphasis on the need to obtain flight safety information is notable, after an F-35A crashed into the ocean in April, resulting in the loss of both the plane and its pilot. Japanese officials have since blamed the crash on spatial distortion for the pilot. However, customer nations receive the same safety information that partners do, albeit slightly delayed due to the need to clear information.

The letter also acknowledges that “partner countries share significant costs,” an indication that Japan would be willing to pony up more cash in order to join the inner circle of F-35 members.

From a pure program logistics perspective, Japan becoming a partner would not be a problem, and in fact program officials would likely find it easier to deal with the largest foreign buyer of the F-35 as a partner rather than customer overall. The politics, however, quickly get tricky.

The former official specifically said that South Korea, due to its complicated political relationship with Japan, and Israel, which was the first nation to be added as a customer after the partnership option was closed, would try to use Japan’s joining the program as a way in, as well. The official also highlighted Belgium, for now the sole NATO ally buying the F-35 as a customer and not a partner, as a nation with a strong case for promotion should Japan be allowed in.

The best argument DoD could make would be that the sheer size of Japan’s buy deserves special privileges, but that sets a bar that other nations could look to climb and effectively buy their way into a partnership.

“This is a very interesting political football that DoD has to wrestle with. This is a bigger political decision than a programmatic one,” the former official noted. “I personally think DoD doesn’t want the headache if they say yes.”

No other countries have made formal requests to join the program, Schiff confirmed. Requests for comment from Lord’s office, as well as the Japanese MoD, were not returned by press time.

In terms of industrial participation, there are opportunities for Japanese firms to pick up work that has been removed from Turkey, said Richard Aboulafia, an analyst with the Teal Group.

Major Turkish defense firms have had a hand in building hundreds of parts for the jet. Turkey’s expulsion from the program, which includes the United States blocking Turkey’s planned procurement of 100 fighters, means that production will at least temporarily move to the United States, with a plan to farm it out to other partners in the future.

Turkey’s aerostructures work could be picked up by Mitsubishi Heavy Industries, and to a lesser extent Kawasaki and Subaru, Aboulafia said. But he said he was “baffled” by the idea Japan would want more industrial participation at the same time they have publicly moved away from its domestic final assembly and check out (FACO) facility, which since 2013 has handled final production on Japan’s domestic F-35s. The FACO facility, which is operated by Mitsubishi Heavy Industries, will continue to carry out production work until FY22 to fulfill the F-35As contracted by Japan between FY15 and FY18.

Instead, Aboulafia sees Japan’s interest as being driven by a desire for future developments, given the decision to increase the island nation’s planned procurement of the jet.

“If they are going to base their fighter force on this plane for decades to come, they clearly want a say in how this plane is upgraded,” he said. “It’s a sovereignty thing.”

And floating in the background is another potential complicating factor for the Pentagon: Japan’s continued drive to develop an indigenous fighter.

Japan is developing a new fighter type to replace the indigenous Mitsubishi F-2 fighter currently in service, and wants the new design to enter service in the 2030s. It is also looking at development pathways for this project, with a fully indigenous design, collaboration with a foreign partner, or a spinoff from an existing fighter design being considered as possible options.

The country is already conducting research and development into a number of relevant areas for fighter design, including stealth technologies, fighter engines and active electronically scanned radars, and had previously built a technology demonstrator, the X-2 Shinshin, and carried out a series of test flights with this aircraft to validate these technologies.

Asked if the Japanese could be considering the fighter program in their decision to pursue membership in the F-35, Aboulafia bluntly responded, “How could they not?”

Schiff, the JPO spokesperson, said the F-35 remains a critical focal point of the U.S.-Japan alliance.

“Any opportunities to strengthen the alliance through interoperability and cooperation will be emphasized. As an FMS customer, Japan participates in F-35 user groups and other bi-lateral forums and engagements,” she said.