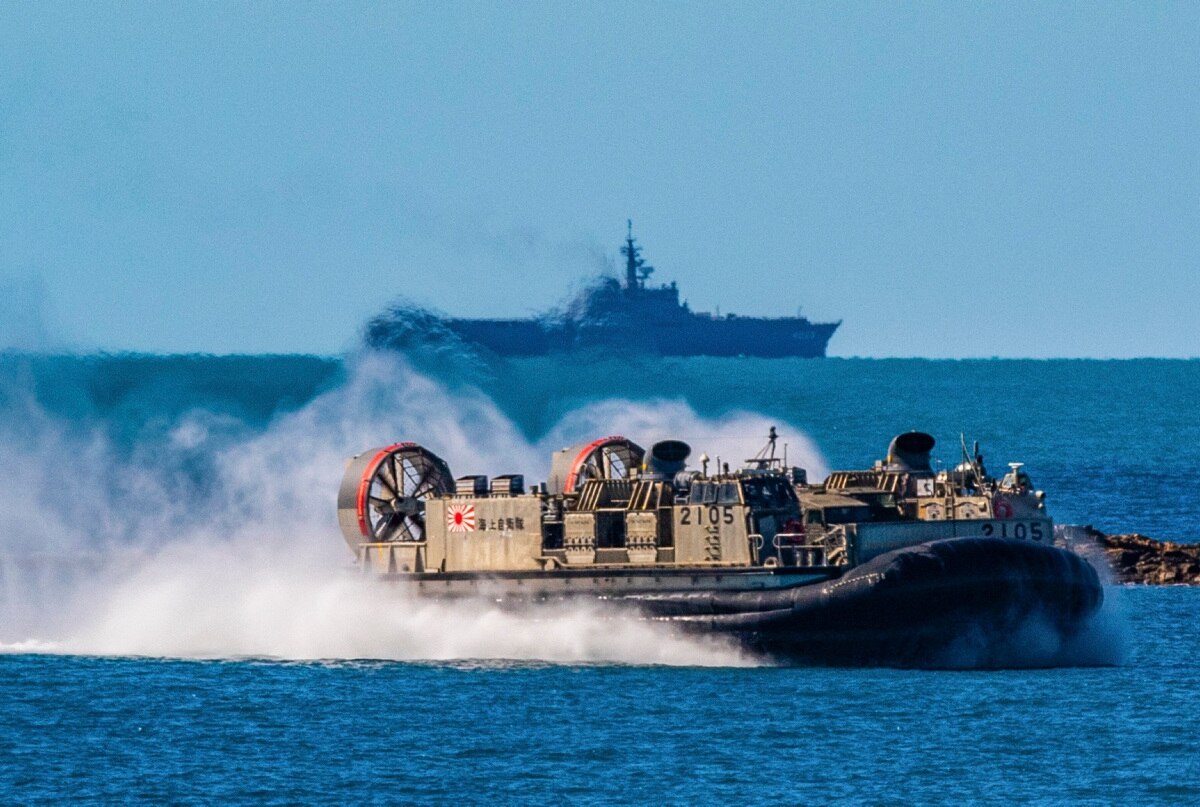 Speaking exclusively with Defense News on board the Japan Maritime Self-Defense Force’s helicopter destroyer JS Ise following the conclusion of the biennial exercise Talisman Sabre, the respective commanders of the maritime force and the Japan Ground Self-Defense Force contingents at the exercise expressed hope that Japan will continue to take part in future iterations of the exercise. This year saw a dramatic increase in Japanese involvement.

The ARDB took part in both amphibious landings — at Stanage Bay on July 16 and at the town of Bowen on July 22. At Stanage Bay, Japanese troops use AAV-7s and JMSDF air-cushioned landing craft. Defense News understands that the JGSDF was tasked with seizing a helicopter zone inland, which then allowed the Chinooks to land further troops ashore.

During the second landing at Bowen, the Japanese led the pre-landing reconnaissance elements that landed the evening before the main landings, while its AAV-7s led the first wave of the main assault force on the morning of July 22. This was followed by a helicopter assault via a JGSDF Chinook just after daybreak on July 23, which saw two lifts of Japanese troops land at Bowen Airport before moving out to secure a nearby objective.

Aoki told Defense News that the ARDB’s participation was “fruitful.” He spoke highly of the Shoalwater Bay training area, noting that its large size made it possible to conduct the full gamut of amphibious operations including ship-to-shore movements, amphibious landings and follow-on operations inland — features missing from training areas in Japan.

Echoing that sentiment, Rear Adm. Tsutomu Shirane of the JMSDF’s Mine Warfare Group told Defense News that the favorable weather over the training areas this time of year was an added advantage. The shallow, sheltered waters of the training area also made it more suitable for amphibious operations.

The JMSDF contingent at Talisman Sabre comprised of JS Ise — which carried the Chinooks along with a pair of JMSDF Mitsubishi SH-60J Seahawk helicopters — as well as the landing ship tank JS Kunisaki — which had two air-cushioned landing craft in its well dock.

Shirane also told Defense News that while the JMSDF’s primary focus at the exercise was supporting the amphibious phase, the ships also took part in the naval portion of the exercise, which included action against surface, subsurface and aerial threats.

Both commanders stated a desire for their respective services to continue taking part in future Talisman Sabre exercises, although they noted the final decision is up to Japan’s Defense Ministry. Aoki expressed “deep sincere appreciation” to Australia for hosting the exercise, which he said improved interoperability with the U.S. military and was an opportunity for further understanding and cooperation with Australian forces.

Talisman Sabre is a large-scale, multidomain exercise held every two years in Australia. Centered on the country’s expansive Shoalwater Bay training area and waters offshore, the main participants are the militaries of Australia and the United States, although this year’s 34,000 participating personnel also saw contingents from Japan, New Zealand, Canada and the United Kingdom.

Amphibious operations are a central part of the exercise. According to Australian Army Col. Stuart Kenny, an exercise co-director whose roles included the management of training objectives, explained that both amphibious exercises were different in nature: the first was a large-scale, extended operation designed to outmaneuver an entrenched, capable opposition force by landing an amphibious force to “open the door” for an armored brigade to enter the battlefield.

In contrast, the second amphibious landing was a three-day raid to clear an island of rampaging militia and restore law and order at the request of the local government without conducting any follow-on operations, simulating a fresh crisis that erupted elsewhere while the main battle was ongoing to the south.

Kenny called the involvement of Japanese forces a “significant event,” referring to the Japanese Self-Defense Forces as “a friend of Australia who are always welcome here.” He also noted that Japan, like Australia, is a key ally of the United States and is further developing its own amphibious capabilities to deal with the changing geostrategic situation in the region.