ELYAKIM, Israel — Israel is developing combat vehicles of the future that will use the latest in artificial intelligence technology to reduce collateral damage and enable formations of manned and unmanned vehicles working in concert.

The director of defense research and development at Israel’s Ministry of Defense revealed the Carmel program concept behind the multi-year initiative, showcasing new technologies at a base in northern Israel Aug. 4.

Carmel is a “revolutionary program,” said head of R&D, Brig. Gen. Yaniv Rotem, in an interview during a visit by Defense News. The goal is to reduce the number of soldiers inside armored vehicles from the usual four to two while enhancing mission performance, all in a closed cockpit or turret. The system uses the latest optics outside and screens inside to allow maneuverability and a 360-degree view.

Plans for an overhaul

Several years ago Israel reached out to its three biggest defense industry companies — Elbit Systems, Israel Aerospace Industries and Rafael — with the challenge to develop the concept and present their ideas. The goal was to create a major update for armored vehicles after decades of stagnant development throughout the world. Israel’s armored corps, once the centerpiece of the military in the 1960s, now is looking toward an overhaul in the next years and decades, with Carmel playing a key part.

The IDF spotlighted five major issues it wanted addressed, from identifying low signature targets, to an artificial-intelligence based support system and autonomous driving capabilities. That means giving the crew the ability to point and click on a screen and have the vehicle identify the best route or waypoints along the route.

“Upon the completion of a month of trials, three major technological concepts have been presented, among others,” a spokesman from Israel’s Defense Ministry said.

With a simulated war-zone village in the far background mocked up to look like a Hezbollah-held urban environment, Rotem discussed how U.S. and foreign countries have been invited to tour the prototypes the three companies have designed. The only part of the program that will definitely be incorporated already is Elbit System’s IronVision Helmet Mounted Display, which will be deployed fully by 2021 in Israel’s Merkava Mark 4 tank.

Israel is using the technology being developed through Carmel to update its existing armored vehicles as well as develop a potential family of future combat vehicles. The hope is that these technologies will also meet the needs of foreign militaries, especially the U.S. where Israeli technology such as Trophy already has found a place. 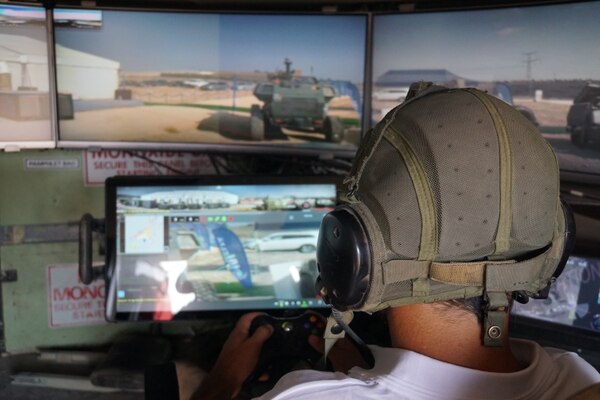 The challenge on the future battlefield for armored vehicles is to be able to operate with agility and also detect and identify threats, some of which might be hiding among civilians or in civilian homes. That is a major difference from the conventional battlefield that armored corps once encountered. In addition, the kinds of anti-tank weapons being developed have made operating in urban environments difficult for armor.

Here Israel’s companies envision using the 360 technology with AI to identify threats and use a formation of manned and unmanned vehicles, all sharing information in real time, to select the best way to neutralize a threat. Imagine one tank being targeted by a Kornet missile while a second and third vehicle with a better view can use guns or missiles to take out the Kornet team. While two soldiers share the burden of driving the vehicle or firing the weapon systems, a third could coordinate between vehicles, perhaps from a mother ship vehicle in the rear. Israel also wants its future combat vehicles to have hybrid propulsion and low signatures, two technologies that seem years in the future and which were not unveiled on Aug. 4.

Rafael and IAI both constructed an internal suite that involves the use of panoramic displays in front of the two-person crew. IAI gave the crew Xbox-style controllers while both IAI and Rafael used a touch screen.

Elbit incorporated the IronVision helmet and a joystick, which has the feel more of sitting in the cockpit of a jet fighter, as well as more than forty cameras around the armored vehicle. The two crew members have identical suites in front of them where they can each choose who will do what task. A divider can be drawn so that one could be viewing terrain from the hull while the other’s screens show a turret 360 degree view.

Israel tested each vehicle for a week against four different scenarios involving both night and day operation.

The tests “changed our state of mind about ground force maneuvering,” said Rotem, who pointed to the potential impact of AI and autonomous capability and multi-sensor fusion of a variety of sensors. He hopes that a quick decision about the technologies could lead to integration on existing platforms, such as Merkava, Eitan and Namer.

There is no decision about building a new vehicle at this time and the MoD has not put a price tag on the program.

IAI’s Zvi Yarom, vice president and general manager of the land systems division, says that after three long years of development, little doubt remains that the future will trend towards full automation or unmanned vehicles.

“We need to understand the technology is ready and we need to show that it is ready,” he said. “This project put the signs where to go.”